Growing up with a birthmark, I was always aware that I was a little ‘different’. I can recall seeing other people with visible differences like mine only a handful of times in my life. Every time I saw someone with one, it was a welcome reminder that I wasn’t strange or ugly or weird and I most certainly wasn’t alone.

Thanks to the power of social media, this feeling of recognising myself in others has grown because I have been able to see that visible differences are so much more common than I used to believe. I have connected with other birthmark warriors and learnt about a range of visible differences that I didn’t know existed before. One of those differences is vitiligo.

Joti is a teacher, mother, Instagram influencer under the username @vitiligo_and_me and vitiligo advocate. She participated in the documentary Misfits Like Us and since then has gone on to work with charities like Changing Faces UK in order to spread education and understanding about vitiligo as well as provide those with the condition a person who understands their struggles to connect with. She’s the kind of person I would have loved to have known about when I was younger and struggling with my self confidence issues and the kind of person who is perfect for this blog. 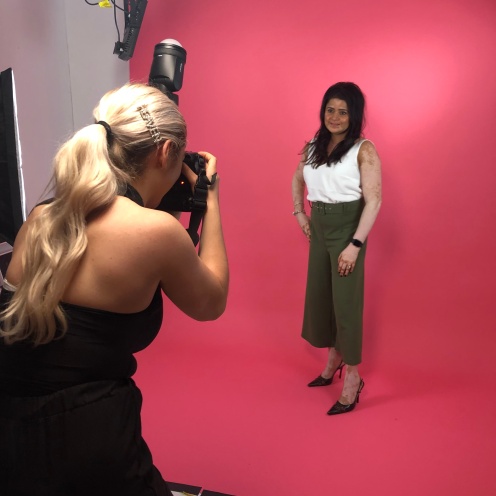 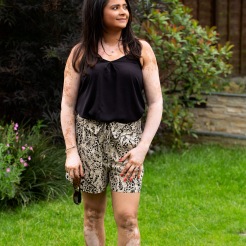 When were you first made aware that you were ‘different’?

I discovered vitiligo at the age of 21 when a small white spot appeared on my left arm. This white spot then continued to spread over more of my body.

Unlike being born with a birthmark, vitiligo can start at any age. Being just 21 when you noticed the changes to your skin, it must have been hard to accept. How did you feel about your vitiligo when you first noticed it?

I was in absolute depression and the more it started to spread, the more I felt like I couldn’t control it. I was only 21, I was in the prime time of my life! I was such a confident person so to see my body go through this change was drastic and it hit me hard.

Things are much better now. My vitiligo is there, I’m not hiding it. I’m free after being trapped for so many years and it really is a great feeling.

How did people react to you once your vitiligo started to become more noticeable?

I didn’t really tell anyone in the early days because I didn’t really know what was happening to me and I was still coming to terms with the condition myself. The thing that I found I struggled with the most was mainly the stares. I have never really had comments but the visual stares were what made me feel uncomfortable, especially in the early days when I was struggling with my vitiligo myself. It took me several years to reach acceptance.

With my birthmark, I often have to explain to people what it is and sometimes I wish people knew more about birthmarks so that I didn’t have to do this. What is something that you wish people knew about vitiligo?

I wish people knew that vitiligo is not a burn. People often mistake it for a burn or as a result of a burn, but it’s not.

Celebrities like Winnie Harlow have made a big difference to the mainstream visibility and understanding of vitiligo. Have you noticed a change in understanding since vitiligo has been more widely recognised and represented?

In the last 5 years I have noticed a rise in many ambassadors like myself who are standing up for change and diversity. I have met so many people and taken part in several media projects to raise awareness. In the process this has given me so much confidence to accept myself as I am and I hope that our work has helped other people to do the same with themselves too.

Do you believe that differences are being represented enough in the media nowadays?

Yes, gradual change is taking place, especially on social media. Whilst social media does have its down sides, there are many positives where people are spreading confidence and courage with body positivity.

After taking part in a UK documentary called Misfits Like Us, I set up my Instagram to help show people with vitiligo that they aren’t alone and that there are other people out there like them. I never had this support when I wad diagnosed in 2000 and wish that it had been there for me. I set up my page to inspire and show my journey of embracing the condition whilst living with it and seeing the changes of my skin on a daily basis.

Seeing a diverse range of people in the media and online really does make a difference to how we perceive beauty. In your opinion, what is the definition of beauty?

Beauty is how one feels about themselves. That feeling of being and feeling positive is key. Being able to feel assertive and confident with oneself is beauty.

What advice would you give to anyone with a visible difference who is struggling with self acceptance and body image issues?

Communication is key – talk to someone, do not keep it in. Reach out and find support groups where you can meet people. It is important to realise that you are not alone, even if sometimes it can feel like you are, because you’re not.

I am a much more strong person now than before, This condition has taught me how to be more humble and understanding of peoples conditions.

To connect with Joti and see more of her amazing work, head to here instagram account @vitiligo_and_me