Conversations with Elle (Subject: Fundraising for Victims of Sexual Assault and Rape)

It is incredibly sobering to read that in the US alone,  nearly 1 in 5 women and 1 in 71 men will be raped at some point in their life*. When you expand that to a global scale, it’s even more chilling.

But sadly that statistic does not surprise me because I know this to be a common experience for many people. I myself am a survivor of a sexual assault. I need more than the number of fingers and toes I have to count how many people, women particularly, I know who have been raped, sexually assaulted or sexually harassed.

Fortunately, there are people out there determined to change that statistic and provide support for those who have experienced such atrocities. This week’s interviewee, Elle, is one of those people.

The second eldest of five siblings, Elle is a coffee loving workaholic who is passionate about politics and quite often filled with crazy ideas. Her latest crazy idea – to walk 1000 miles in 100 days – is the reason I am interviewing her today and the reason I call upon you to support her cause. 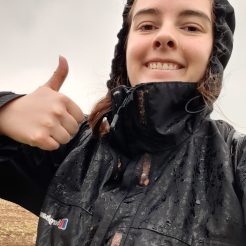 Can you describe the challenge you have set yourself and why you have decided to do this?

I am walking 1000 miles in 100 days to raise money for Oxfordshire Sexual Abuse and Rape Crisis Centre. I decided to do this because I wanted to try and raise awareness to the levels of harassment women face in their day to day lives.

What an amazing challenge! Can you describe the work that the Oxfordshire Sexual Abuse and Rape Crisis Centre do?

OSARCC support survivors of sexual abuse or harassment through a range of different services including counselling, support groups and advocacy. They also work to raise awareness by taking part in campaigns and giving talks on sexual violence.

I am particularly inspired by their See Empower Educate project where they deliver consent and healthy relationship workshops in schools and universities across the county. They have received great feedback from this with students saying how they now have a greater understanding of what is and isn’t consent but also feeling good that they now know there is somewhere they can go to for help. I think it would have made a great difference to my childhood if my schools had provided us with this education.

I have to agree with you – I think that those workshops would have made such a difference to so many people when I was at school. How have you found the walks so far?

So far, they have been incredible- beautiful, calming and refreshing.

They have also been challenging. My feet are in pain every day – my favourite part of each walk has been taking my boots off at the end! They have definitely been a test of my mental and physical endurance.

I can only imagine what it feels like to finally rest at the end of a long day of walking! What response have you had from people when you have told them what you are doing and why?

People have been really supportive. I have already surpassed my fundraising target. The donations and support have really helped me stay motivated.

Sexual assaults, rape and sexual violence are not subjects people often talk about even though they are unfortunately common. What do you hope that your walking mission does about this?

I hope that I can help show people that it is okay to speak up. Rape and sexual assault are treated like a taboo topics which not only teaches us to stay silent when things happen but can also make us feel ashamed or embarrassed. I want to help open up communication between all genders about this.

It’s a lovely thought to think that I could help lots of people, but I am not an influencer or someone in a position to make much impact. If I help just one person in their healing process by taking a stand against harassment, I will be proud of that.

Helping someone during what is one of the toughest times of their life is definitely something to be proud of, as is completing such an intense challenge. What made you decide to walk 1000 miles in 100 days?

I like that the amount of walking I am doing is such a big challenge because it sends the message that rape and sexual assault is a big problem. When I was younger, I watched people ridicule feminists and turn them into jokes. People told me that we don’t need feminism in the UK anymore, that it is already equal. When you are young it is easy to believe what you are told. It even made me embarrassed to talk about feminist issues for a while.

I want this challenge to change that. I want people to see that rape and sexual assault still needs addressing because someone is willing to walk 1000 miles or talk about it for 100 days so that people will face up to the fact that it is still happening.

I completely agree with you that it is something that people don’t realise is as big an issue as it is. There is also very much a culture of victim blaming in society. What do you think is the impact of this?

It prevents victims from coming forward. We are far too afraid to deal with the questions like ‘well what were you wearing’ or ‘were you drunk’.

It also makes us think that it is our fault. We might make excuses for our attacker with thoughts like ‘well I led him on’ or ‘I let it happen’. This is detrimental to our recovery. It also is the thoughts that will keep a lot of women from leaving abusive relationships.

We are isolating the victim by siding with the predator and this must stop.

What would you say to someone who believes that what people wear is a deciding factor in whether they are sexually assaulted or raped?

I would ask them where they think they got that idea from. Hopefully the more we question people with these thoughts, the more they question it themselves.

I think this problem needs to be seriously addressed from its roots. It is such a dangerous attitude to put out into the world, but it is drilled into us from a young age. What else are we meant to learn when we get sent home from school for wearing shorts because it might distract boys? Schools find it much easier to create a dress code for girls than to actually put the effort into educating their students on human kindness, just like a society finds it easier to think of reasons to blame a victim rather than face up to the nature behind the predators.

You are incredibly passionate about what you are doing and I wish you all the best with your challenge – you’re going to smash it! If I wanted to support you, what could I do?

All donations are extremely appreciated. They are helping OSARCC to continue the amazing work they do throughout this crisis.

You can also help and support by sharing my story or your own if you feel comfortable. The more we talk about these issues, the more we can work together to help them.

I encourage anyone who can do so to create their own 100 day challenge. It doesn’t have to be walking or even outside. It could be an artistic challenge or anything. You could raise money for a local crisis centre where you live.

Domestic abuse cases are soaring right now with isolation, so now is an important time to send a message that we won’t stand for it, that we are on the side of the victims and that there is help out there.

When you think of completing this challenge, how do you feel and do you think you will do other fundraising like this?

Completing it feels like so far away right now! I don’t think I will even be able to imagine it until I have passed 500 miles.

I would love to be able to do other fundraisers. I think focusing locally is key because different things are needed in different communities. I would also like to have the opportunity to travel and develop a better understanding of what can be done to help women in different countries.

Doing this challenge has made me realise that it is actually my responsibility as an older sister, cousin and one day mother to try and make this world a safer place.

Just try to be kind.

If you would like to support Elle, you can donate by clicking here

*stats can be found on https://www.nsvrc.org/statistics