Women are constantly bombarded with messages on how they ‘should’ look. We should have abs, toned arms, toned legs and have straight, white teeth. We need to be hair free. We need to smile. Our hair shouldn’t be frizzy, but long and flowing. Our waist needs to tiny, our legs long, our nails manicured, our skin blemish free. Oh, and we should be thin, thin, THIN!

Thankfully, women around the world are starting to revolt against these oppressive and ludicrous beauty standards. I interview a lot of them.

Something I love about body image interviews is that we can debunk some myths about how a body is ‘supposed’ to be. Your body is supposed to be just that – your body… own it.

Twenty nine year old Rachael sums up the idea of owning your body like no one else. A music fan who performs in clubs and pubs, Rachael has the most amazing fifties fashion sense. But it’s not just her impeccable dress sense, hairstyle goals and expertly applied makeup that make Rachael someone who embodies confidence and self acceptance – it’s the fact that she has survived two eating disorders and overcome the taboo of having breasts that have a 5 cup size difference between them.

To put it simply, she’s great. She learned how to love herself, and she’s here to help you do the same too! 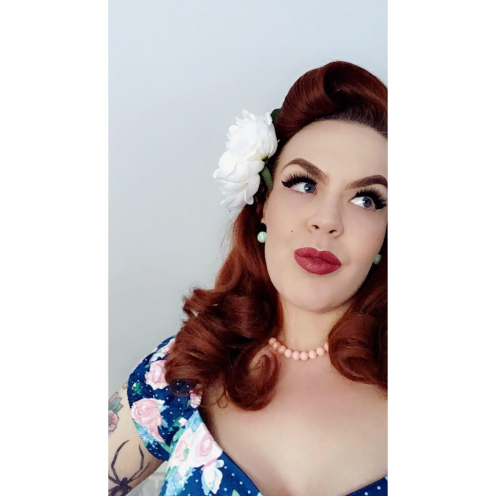 In your own words, describe your history with body image.

My history with body image for as long as I can remember has been negative. I was overweight from a young age. I comfort ate. Looking back at photos from when I was in nursery, I was chubby, especially in comparison to the other petite, average sized children. It’s only until recently in therapy I’ve learnt that, even when I was as young as 3, I had binge eating disorder. I’d raid the cupboards for food in secret. When I was 10, I’d cook burgers on my own whilst my parents were out.

I was always made to feel different and fat so I never learnt how to appreciate my body when I was growing up. Because I’d been made to feel like it was just a fat mess, I lived up to the label of the ‘fat kid’ and ate more, making myself even bigger.

I became bulimic when I was about 13, originally to make room to eat more food. By the time I hit 20, being sick and/or not eating at all lead to me becoming anorexic.

On top of my struggles with food, as a teenager I developed asymmetrical breasts which I think contributed to my eating disorder. One of my breasts was an F cup and one was a B cup. I felt like something out of a circus. Looking in the mirror made me feel physically ill. I was bullied for being overweight and I never bothered with men as I was too embarrassed about my breasts.

When your anorexia and bulimia were at their worst, what was daily life like?

Daily life with an eating disorder truly is hell. I wouldn’t wish it upon the people who bullied me for being fat, even though they played a part in me ending up the way I was. I was in and out of hospital with liver problems, dehydration, constant chest and lung infections, which meant I missed a lot of school. Normal things like going out for meals with friends and family were impossible. I used to make myself sick in bin bags as I knew my parents were wary about the amount of time I spent in my bathroom. I had no energy, I looked like a zombie, my skin was awful, I was irritable and I couldn’t think or function like a normal human. My life revolved around exercising and ensuring my stomach was empty at all times.

Many times my family pleaded with me to stop. I watched my mum’s heart break whilst she sat with me in the back of ambulances. She’s old fashioned and is from an era where eating disorders were unheard of so at times she struggled to understand. I felt isolated because everyone around me just ate and went about their daily lives, whereas I couldn’t grasp the balance between overeating or not eating at all.

On top of struggling with eating disorders, your asymmetric breasts impacted your confidence, so much so that you had breast surgery to change them. Can you explain why you did this and what difference the surgery has made to your life?

I had the surgery due to there being a 5 cup size difference in my breasts. The surgery gave me the confidence to do normal things like wear tight fitting t-shirts, dresses and even have sex.

I didn’t realise how many things I hadn’t been able to do before until after the surgery. I used to wear two silicone fillets in my bra on my smaller breast to balance out the size difference, but wearing them caused eczema. Sometimes if I bent over to get something, the fillets would fall out. I constantly felt uncomfortable. Even in my own home, I hated going bra free or wearing just a hoodie as you could see from the outline of the shape of my breasts that they were uneven.

Having the surgery helped my self confidence massively because I could look in the mirror and the most obvious insecurity was gone. It helped me gain more confidence with men to go on dates.

Surgery is one thing that has helped you, but what other things have helped you get to a better place with body acceptance?

I relied a lot on reassurance from my family and friends. I was in a VERY fortunate position that my Dad paid for me to have reconstructive breast surgery, however I had to be well enough for the operation. Previously I had tried to get the surgery through the NHS but was rejected. Needing to be well enough for my surgery was motivation to begin eating and recover from anorexia. I got there and, thanks to my dad, I had the surgery. Even now, I still can’t believe how lucky I am to have had it.

I used the time before my operation to ‘fix’ my autopilot mode. I was no longer automatically going to be sick after meals, but eating healthily and exercising in moderation instead. A massive part of my eating disorder towards the end was the insecurity of my breasts so to be able to have them reconstructed was the motivation I needed to overcome it all.

I stopped going on the internet and looking at ‘thinspiration’ websites. I was more honest with my friends and family about what I was doing and to help me they almost babysat me after meals to ensure I wasn’t sick. I had to start small – it took me a long time to be able to eat a full meal. Some days I’d have to pick at a meal throughout the day, but I got there. You’ve got to have patience with yourself.

What role did the media play in your body image struggles and what changes do you think need to be made to help promote a more positive outlook on body image and differences?

During my teen years, plus sized models were unseen. Everyone in magazines was very slim and I was obsessed with looking at ‘thinspiration’ websites. Nowadays there’s more balance of plus sized and petite bodies being shown which is great, but the flawless make up look and over exposure of perfect bodies is still everywhere – you only have to open social media to see it.

I think we need to do more to talk about our bodies and struggles and engage with others. I follow loads of bloggers on Instagram because they allow me to see that there are other women similar to me out there. The media will always be a glamourising marketing strategy, but hopefully in years to come it will get better.

Having breasts that are different sizes in incredibly common, but it is something that isn’t often spoken about or reported in the media. Why do you think this is and how do you think we can break this silence?

I’ve found a lot of positivity online about clothes sizes, but nothing about boobs! This is why I’m speaking out because I hope someone can read this and know that it’s okay to have breasts that are different sizes. It is far more common than you think – I found out after my surgery a friend had the exact same problem, but neither of us had confided in each other as we were so embarrassed.

It’s wonderful that you are using your experience to help other people out there. What is your relationship with food and diet culture like now you have overcome your eating disorders?

It’s ‘normal’, I think. I still have bad days when I’m stressed where I’ll only eat little bits rather than 3 square meals, but for the most part I eat well. I enjoy lazy takeaway binge days and don’t feel like I’m on a self destruct binge and need to make myself sick afterwards. I love food – healthy and unhealthy. It’s taken me a long time but I’ve finally got the right balance between vegetables and chocolate bars!

What advice would you give to someone who is struggling with an eating disorder or their body image?

Speak up! Go to your doctor ASAP and tell them. Go on the waiting list for counselling, tell your parents, your friends, employers, teachers, your internet audience. Do not suffer in silence and allow your head to make the situation worse when others around you can make it better. Look at online forums for support groups, read positive articles, gradually allow yourself to eat and love food again. TALK!

Great advice! As women, we’re often told how to look and the idea of ‘beauty’ is very narrow. After everything you’ve been through, what does beauty mean to you?

Beauty to me is contentment not comparison. Why wish you had a bigger bum if yours fits your body perfectly? Make the most out of what you have, not what you would like to have. If not, I think when you’re older you’ll look back you’ll realise how much time you wasted worrying about things that were fine all along.

“You have two choices; evolve or repeat”.

I am sometimes disappointed in all the things I missed out of growing up because of my own insecurities so I now believe to make the most of every situation.